THE EVOLUTION OF INDIAN ASSOCIATION OF DERMATOLOGISTS, VENEREOLOGISTS AND LEPROLOGISTS 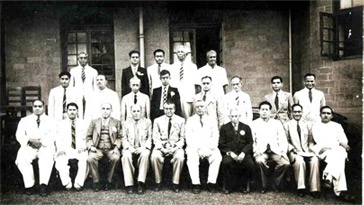 At this Conference, a resolution was passed to merge all the three separate chapters, i.e. Calcutta, Madras and Bombay, into one under the umbrella of ‘The Indian Association of Dermatologists and Venereologists (IADV)’. The Founder President of IADV was Dr. A. C. Rebello and there were a total of only 24 members of the Association. Dr. A. C. Rebello in his presidential address had mentioned that post-graduate teaching in dermatology started with “The First Chair ‘in Dermatology being established in 1907 at J. J. Hospital and G. M. C., Bombay. Late Major C. Fernandez was the first Indian Chairman of Dermatology Department. At that time, only outpatient facility existed. In 1921, in Calcutta, under the guidance and Chairmanship of Late Col Acton, a Skin Research Department with various units (including Mycology) was established in the School of Tropical Medicine and Carmichael Hospital for Tropical Diseases. In 1926, a one-year diploma course in Dermatology (presently known as DVD) was started at KEM Hospital under Bombay University and by 1951, many major teaching hospitals and universities in India had established posts of Lecturers in Dermatology. Dermatological Society, India (DSI) came into existence in Calcutta in 1960 after the All India Dermatological Congress at Calcutta under the Chairmanship of Maj A.M Chakraborty with Dr. J. Majumder as the Organizing Secretary. The first President of DSI was Dr. S. Rajagopalan. Dr. K.D Lahiri became the first Honorary General Secretary and Dr. S.C. Mitra the first Honorary Treasurer. The 1st Asian Congress of Dermatology was organised in Madras (Chennai) in 1970 by Dermatological Society of India(DSI) under the Chairmanship of Prof A S Thambiah. The Organizing Secretary was Prof M. Natarajan .

Validating your member no & generating OTP...

Only LM members can apply for nomination.